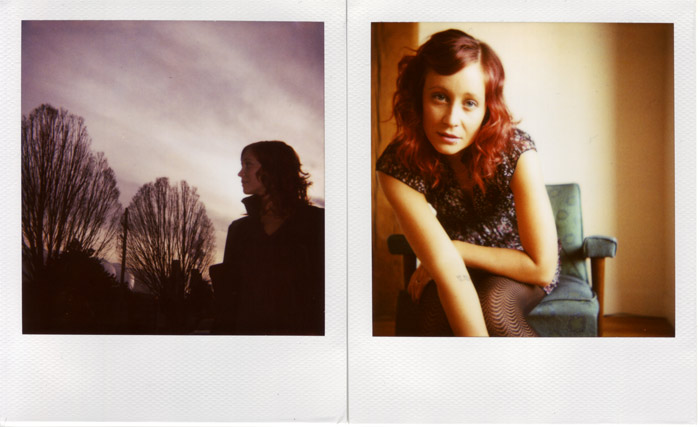 So it’s only one day after I complained that I am lazy bastard and I get to say that I am moving forward. I think that today would really qualify as at least a good step.Â  In fact it was a super busy day filled with pure awesome (:Â  The day started at the early hour of 5:30am with a bit of morning driving about while M was at her weekly cult meeting. While they were toasting kool-aid and such I was chasing the sunrise around.

Harry Jerome Statue with with morning in the back ground…

…and my favorite tree in Stanley park.

Next on the list of awesome today was a photo shoot with a couple of new models that I haven’t worked with before – Leanna and Amie. We had a blast shooting with old cameras, vintage clothes, and some old furniture.

Amie out in the wilds of Vancouver and in the studio.

The same place with Leanna. These four shots are taken with my standard run of the mill Polaroid 600 Camera

I took a few rolls of film that I will drop off to the lab as well but these are a few of the digital shoots from the day.

I think we are going to do a whole fashion inspired chair in random place series.Â  Mostly because chairs in random places = buckets of awesome! And Buckets of Awesome is what I am all about!

Continuing right along with the awesomeness of the day, I had band jam time in which we did a few takes of our favorite songs. I managed to somehow tear my fingernail half off yesterday on the mountain so I was playing with a bandaged finger. Shan played us a hidden track from a band (I forget the name of the band) where they ‘cover’ Guns and Roses. This prompted us to start playing Bon Jovi and well it all went down hill from there. Luckily the Zoom was recording the hilarity that was our version of Dead Or Alive :)